I felt a bit privileged to be invited to participate in this Project (‘Give Peace a Chance’ – ROOTS Tandem Group Project – Istanbul, Turkey) as a guest because I was neither a Peace Work Institute participant, nor a Tandem Group member.

As all my fellow friends, I had certain concerns about the visit to Turkey and the Project too, since I had already had an experience of an Armenian-Turkish Project with the same participants, but held by another organization, which was almost a failure. However, as I fully believe and trust in the YMCA in all its initiatives, I am really happy I have joined the project and I am grateful for this experience. I think I would never travel to Turkey all by myself. This project was all about the courage to face reality, tolerance, breaking stereotypes and overcoming barriers.

There are specific scenes and faces I carry forward with me from those days and these are very dear memories to me. Unfortunately, sometimes it is extremely hard to put them into words or to share as they are merely pure emotions and feelings and I am not a person who likes talking much about them. What I would like to share with you is my understanding of the whole concept of this project during which, regardless of the backgrounds and the whole context, in general, we could have a week full of some concerns from both sides I guess, but also of joy, fun, and love together.

I still remember the fancy-dress party day. I remember it was a lot of fun while we were preparing in our rooms at the hotel. I had my usual clothes on with a fancy hat with some flower decorations that Tatul had managed to grab for me from the theatre dressing room to complete my image. I had not even had time to try the hat on before the day, but it fully it my dress. I think I looked like an eighteenth century lady. At least I felt so in this old building. 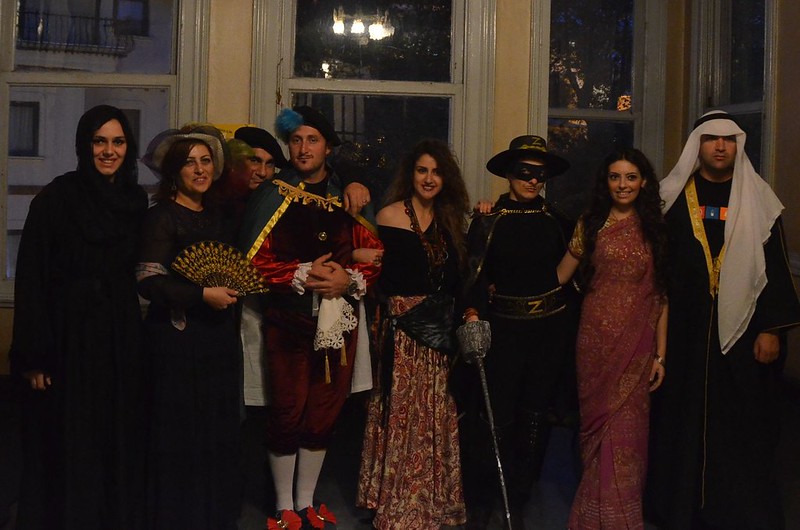 When I entered the main ‘ballroom’, which was quite large with a rather high ceiling, old, not freshly painted and poorly lit, I could feel the ancient atmosphere and the rich memories those walls carried. I usually enjoy observing people- their gestures, behaviors and I am more into listening to them rather than talking myself. But then I felt numb, hardly able to speak a word and observed the people walking around. I felt like a ghost, a guest from the past, but also a part of the present and it was all due to the hat I was wearing.

I could see people dressed in different characters that were like the ‘blobs’ to me as I did not recognize my friends in them, but images representing different ages and stories as an example of peaceful coexistence of various epochs and cultures, just like the whole city we were in. They were dancing all over and I had the motto song of the Project in my mind all the time – the ‘Give Peace a Chance’ by the Beatles. Like Toledo, Istanbul is a multicultural city, too, and it demonstrates the main condition for human reconciliation and world peace, which is respect for your neighbour and tolerance to differences. Only reaching these two important values, both in one’s mind and heart, one can be a peacebuilder. So why not give peace a chance?

Haykuhi Karapetyan, Armenia – Participant of the TGT exchange visit to Istanbul in 2019 and PWI 2019 event in Toledo