Summer camp is the best way to unite young people with different hobbies, habits, thoughts and dreams. I have participated in many camps and youth projects before but I am really impressed by this one. There were several training sessions during the camp. All the participants were very motivated and interested and wanted to get as much as possible from the trainers.

We had a full and very busy schedule with quite interesting and useful training sessions. First of all, YMCA Europe “Roots for Reconciliation” project was presented to the camp participants by elder “rooters”. The Peace Work Institute (PWI) as the RfR project consistent part was presented too. The camp was led by David Melkumyan and Vladimir Ghulyan (YMCA Artsakh), Lusine Vardanyan and Tatul Bostanchyan (YMCA Armenia) who are PWI first phase graduates who led the “Camp for Hope”. I am the representative of YMCA Artsakh in PWI second phase and recently I took part in the first reunion in Tbilisi.

Tevan Poghosyan, who is an active social and political leader and a fantastic person with a huge base of knowledge and a great sense of humor, covered sessions on conducting negotiations, leadership and communicational skills. The participants learned new important and useful things.

Each day of the camp was very different. We met people who hold high positions in the Government. All of them spoke about the current situation in their sphere in the republic and asked youth to express their opinions on the topics being discussed. The youth had an opportunity to ask questions they were interested in and make suggestions, if requested. It was very interesting to observe my peers who were empowered by those meetings and showed their willingness to contribute to the further development of their country. It was essential to realize that their voice was heard and their opinions mattered.

Mr. Ashot Ghulyan, the Chairman of the National Assembly of the Republic of Artsakh did his best to spend as much time with the campers as possible. It’s always interesting to talk to him. Young people had a chance to ask questions they were interested both formally and informally.

During the meeting with Ms. Narine Aghabalyan, the Minister of Culture and Youth Affairs, the campers as the most active young people in the republic had a chance to suggest new ideas to make the life of youth more interesting. She promised to consider them and help to bring to life any youth initiative that would be well-thought of and sound realistic and sustainable.

I think everyone was greatly impressed by the meeting with Mr. Grigoriy Gabrielyants, the former Minister of Geology of the USSR and the current Advisor to the President of the Republic of Artsakh. Originally not being from Artsakh, he moved to live in this beautiful country and he quite likes it. Apart from talking about the natural resources in the territory of Artsakh and about the newly-opened Geological Museum in Shushi with precious exhibits from his personal collection, Mr. Gabrielyants spoke about life, about his achievements both as a family person and a public figure and about his observations in general. He shared his concerns and his thoughts about the current situation in the Republic of Artsakh from the perspective of a representative of the elder generation and from the perspective of his current position in the Government. He gave some advice on how to live and to work on self-development. His speech was quite inspiring and the campers would not let him go for quite a long time asking him different questions, sometimes quite tricky and funny. He patiently answered all of them.

The situation on the borders is always a worrying part of the day of every citizen of Artsakh. I think that was the reason the meeting with the Minister of Defense was organized. Mr. Lyova Mnatsakanyan spoke about the recent developments on the borders and the priorities for the Defence Ministry to ensure keeping the ceasefire and issues for the peaceful regulation of the conflict.

During the week we visited Kashen Mining Complex and got to know how the mining process functions.

Besides the official meetings, each evening the camp hosted famous singers who ensured the joyful end of each day performing for and with the campers. It is worth mentioning, that there were several very talented young people who sang and played the guitar perfectly around the camp fire every night well as well.

We also hosted the Pan-Armenian Media Group representatives who were in Artsakh those days with concerts for the border communities. A famous social media journalist and a film director, who are the group members, held sessions on information security and social media considering the political context. We use social websites every day, but we do not fully realize what we really can do, be it to support an idea or a campaign or harm it. We also learned basics in short-movie making and highlights on how to display a full idea in a short clip. The Pan-Armenian Media Group singers performed for the campers on the last night party.

During the camp we had a lot of energizers and played a lot of games. Everybody enjoyed the sports day with interesting active games and everybody struggled to get higher points and win the competitions. It was fun. The camp program had scout elements such as living in tents and sleeping in sleeping bags in a forest, being in the nature and not harming it, making campfires and making some food on fire.

In the end, I would like to mention that I met my peers with the same interests as mine and we all made good friends. We learned a lot from each other and supported each other when we were not in our ”comfort zones” to get fully integrated. We learned new things and understood that that youth play an important role in the country. All of us felt empowered to take participate in the social life of the country more actively and contribute to its development. Everybody in the camp had a great time.

Thanks to the YMCA for this great experience. It gave me a hope for a better and safer future with a distinct feeling that each of us has to contribute to the development of our homeland and establishing peace in the region. 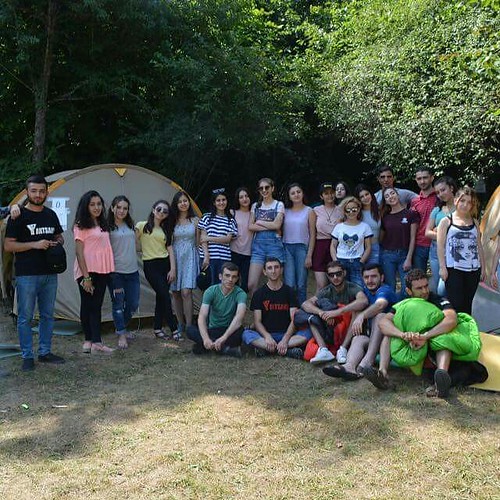